In early March of 2020 Jeff Martin from Primitive Lifeways LLC conducted an archaeological investigation and survey at a large Prehistoric Prescott Culture site located in the premises of Wilkinson Ranch. Due to the lack of previous data recovery by... (more...) 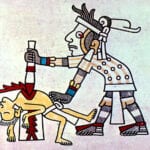 Several days ago a video went viral of Candace Owens discussing the issue of violence and cannibalism in Native America and Mesoamerica (ancient Mexico). Along with Owens’ comments about the Aztecs killing hundreds of thousands of people by human... (more...)

It was thirteen years ago to this date where I was amazed by a simple and effective piece of throwing technology that would reshape the way I viewed traditional hunting methods. I remember the great Paul Campbell was at the Malki Museum in Banning, California... (more...)

As I analyze and think of how fire was initially created by our early ancestors, I raise more questions than answers. Was fire made by accident? Was it an evolutionary trait caused by increased nutrition and cognitive development? Or was fire well thought... (more...)

Back in late 2018 I published a blog article introducing readers to Hohokam ceramics. Hohokam pottery vessels are some of the most amazing works of art across the American Southwest. Known for their complex design elements, vivid colors, and unique iconography... (more...)

Part One: Making pottery When analyzing prehistoric people in the American Southwest, how do we define different cultures? Some in the general public might say through religion or ethnicity. Indeed, a conclusion of such is partly correct. However, in... (more...)

When prehistoric peoples crossed the Bering Strait they discovered lands very rich in resources. Water was plentiful, vegetation was diverse, and wild game moved more slowly and yielded heavy amounts of meat. Some of the first people that crossed the... (more...)

Archaeology In the Dells

Archaeology In the Dells

The Granite Dells located in Prescott, Arizona is truly a unique area that attracts thousands of locals and visitors wanting to experience everything nature has to offer. Some of the most popular activities include hiking, biking, fishing, kayaking,... (more...)

One of the most fascinating study areas in Hohokam archaeology is the analization of ceramics. Hohokam potters made two primary types of pottery with many different shapes and styles. The fist type is a plain ware that was fired in oxidation. Plain wares... (more...)

When archaeologists analyze the prehistoric Hohokam of the Phoenix valley we truly see a high culture society that was highly organized and built monumental structures. In Hohokam archaeology we are finding more evidence of a ranking system with the... (more...)